Hammad Safi, 11-year-old kid who has Pakistan enchanted, is a name that rose to become the first super kid of Pakistan by becoming the youngest Motivational Speaker and Article Writer. He has been awarded by renowned national and international figures and has been honoured with the title of “Fakhr-e-Pakistan (The Pride of Pakistan)”. Hammad is the only kid who has officially delivered motivational and Awareness sessions in more than One Hundred well reputed Universities of Pakistan.

Hammad Shares his vision of helping Pakistan become a United, Strong and Educated State. Inspired by Allama Muhammad Iqbal, Hammad quotes his poetries and sayings in his speeches and keeps on reiterating that youth needs to know who Iqbal is and what has he proposed for the youth of Pakistan to act like.

Hammad Safi belongs to Peshawar, provincial capital of Khyber Pakhtoon Khwah Province of Pakistan. He is currently studying at The Super Kids School System that is a project of The University of Spoken English & Computer Sciences situated in Peshawar. He also Heads Super Kids Program (Islamabad), that he runs to help other kids polish their abilities and capabilities to become confident enough to cope up with challenges of life. Apart from his academic and professional career, Hammad Safi is an active social worker as well. He is the director of Ummah Children Academy (Nowshehra) where he is currently providing basic needs i.e Food, shelter, Cloth, medication and Education to 700 orphans. He is striving to get more orphans enrolled so that a dejected and neglected part of nation can be put into a right direction. The orphans are also financially helped so that they could be comfortable at home as well. “Children are the responsibility of their Parents, but orphans are the responsibility of Nation”, Hammad believes.

Several Hundred University students sit enraptured as Hammad Safi lectures them on how to make a life that matters. He has become all time favourite and a heartthrob of people around the country. People gather in numbers just to see a glimpse of this Super Kid. He is the new wave of change and is encouraging the students to walk an extra mile and live their dreams. Kids Like Hammad Safi are the examples of Emerging National Heroes. Hammad sees himself as a leader in the future.

Hammad safi is the student head of a department called supper kids program (SKP) at the University of Spoken English & Computer Sciences Peshawar ,where he studies modern languages, Computer expertise , Iqbal the mysterious , patriotism Professional dynamism and communication skills. His unconventional way of study has made him capable of understanding and knowing what other students learn at the age from 22 to 25. His main focus, as he says in most of his lectures, is the empowerment f youth because he thinks that a country, with educated and professional youth, is a place of creativity, ingenuity, progress, innovation and invention. He not only studies academic curriculum but his studies incorporates the analysis of the factors that are deviating our youth from the right direction to a wrong path that leads toward ethical, moral and legal destruction.

Hammad Safi is known to be the youngest professor and the Youngest Journalist. He has so far delivered lectures on various topics in different universities. Most of his lectures are patriotic and focus the love and affection toward the country. His focus is also to educate the youth on how to make good living and a successful life by means of getting the practical knowledge and implementing the learned knowledge and teaching it to others as well. With a vision of making One, Educated and Strong Pakistan, Hammad at the age of 11 has become a heart throb of the people who have listened to him and have started following him on social and electronic media. He has so far appeared on national and international media and has also been nominated for many national and international awards and conferences where he would present his ideas on how to bring educational reforms. 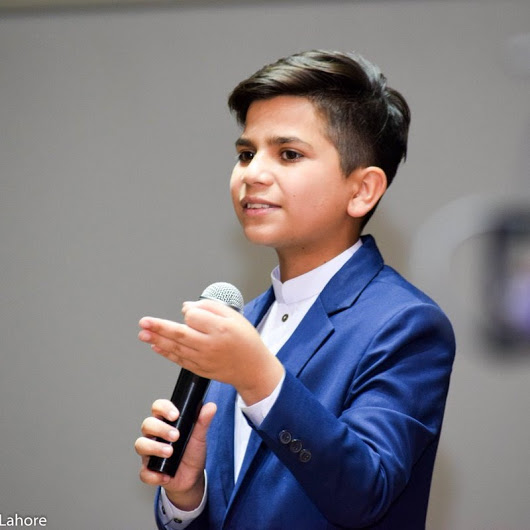 I was (thinking) about suicide, because there are no jobs and no success in life,” he told AFP. “Then I saw a video lecture of Hammad Safi. I thought, if an 11-year-old child can do anything, why can’t I?” Online comments also shower him with praise. “People love him because he’s just talking, he’s a hit every time,” says Samiullah Waqil, one of his former English teachers. Safi’s youth and precociousness seem to form part of the enchantment. But he is also seen as presenting a positive image of Pakistan, one that resonates powerfully with his listeners.
Discussing the distinguished poet Allama Iqbal, Safi says: “If he had not been there, I or anyone else would surely be cleaning the toilet in the house of an Englishman.” ‘I inspire the universe’ At Spoken university , the faculty see him as a “nanha professor”, or little teacher; a protege who could go on to great things one day — though what, exactly, they are looking for from him remains undefined. Safi was studying at a traditional school but also taking English classes at USECS,

where he was quickly noticed for his “phenomenal self-confidence”, says director Ammer Sohail. Shortly afterwards, he left his school to be full-time at USECS, continuing his English studies and embarking on his motivational career. The university, made up largely of working-class students, now has Safi offer motivational lectures each week, in addition to his growing internet fan base. His “job”, says Sohail, is to encourage the poorer students, “to give them hope, so that they break their glass ceiling” in a country with glaring education inequality, and where more than 40 per cent of the population is illiterate, according to UN data. “We want it to spread this education awareness to the whole country,” he says emphatically. Safi’s father, a wealthy 48-year-old businessman from Peshawar named Abdul Rehman Khan, agrees. “He is not on ordinary child,” he explains. “People have seen something in him. I have myself seen abilities in him. That’s why I have appointed special teachers for him. I want him to become a special leader. “I’m very proud… For his abilities, for his intelligence, he is God-gifted.” Safi repeats the sentiment, though sometimes he gives the impression of doing so by rote. “I am an inspiration, not only for Pakistan, but for the world. I inspire the entire universe,” he tells AFP, without blinking.

Start of the Journey:

Hammad was first invited to The University of Peshawar where he delivered a very mind blowing and thought provoking lecture of almost 1 hour in which he discussed about facing challenges and the importance of challenges in life. The lecture was given a media coverage that was watched by more than 1 million people on social media. It gave Hammad wings to fly. A series of lectures then started and he went from north to the south of Pakistan attending seminars, special lectures, and motivational sessions. His experience may be encapsulated in the following list 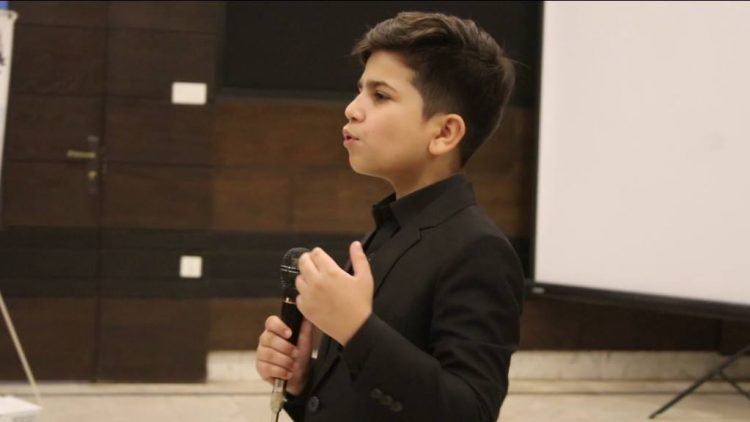 He sometimes studies “10 to 12 hours in a row”, according to his professors. In his simple room, photos showing him in the company of the Chinese ambassador in Islamabad and Pakistan Tehreek-i-Insaf Chairman Imran Khan hang over his bed. Posters of cartoon heroes or sportsmen are absent, toys are few. “Batman and Superman are fake heroes, but those are true,” he says, pointing to the portraits of Allama Iqbal, Bill Gates and Albert Einstein adorning his walls. “Where’s the child in him? He’s gone, because he thinks above his age,” worries Bakht Zaman, a professor at Peshawar University, who attended a lecture later shared widely on YouTube. “This talented child is a good motivational coach” but “he lacks intellectual depth,” he notes. “He can become what they want to do with him, but it will take time.” Hassan Amir Shah, the vice chancellor of a public university in Lahore, where Safi has also lectured, hopes for his part that all the attention “will not drive him crazy”. “He still has a long way to go, many books to read,” he tells AFP. “We will only be able to judge him in 20 years, when he is an adult.”

“With the new day comes new strength and new thoughts.”